The Rivian R1T Pickup Truck Can Do Donuts on Command 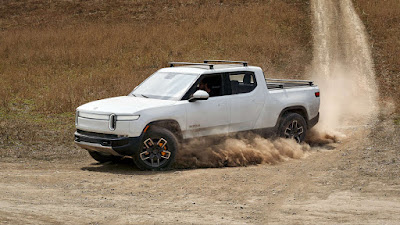 Tesla may have garnered the most attention with its Cybertruck pickup truck, but that doesn’t mean they’re the only all-electric pickup truck that’ll be hitting the market. Another is upstart Rivian, and as a Christmas gift to truck lovers, they’ve released a clip of their upcoming R1T pickup truck doing one cool trick.

The trick is called a “Tank Turn” and it means having a vehicle change direction on its own footprint; turning the left and right wheels against one another. The Rivian is able to do this because it features four hub-mounted motors, and because they can be made to spin in opposite directions, the result is a pickup truck that can do this neat 360-degree spin.

The Tank Turn feature won’t be available on just the pickup truck, too. Because 91 percent of its components are shared with the R1S SUV, Rivian has confirmed that Tank Turn will also be an available feature there too.

While this could make the R1T or R1S a cinch to parallel park, its real-world application is fairly limited. Rivian says the feature will only work on loose surfaces like gravel or mud.