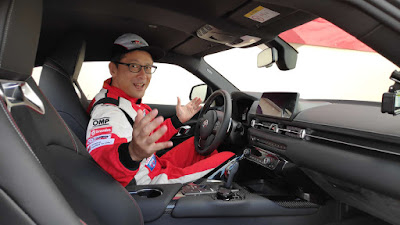 President Suzuki’s term lasted from January 2016 to December 2019, and was marked by a strong resurgence of local parts manufacturing, grassroots motorsports and environmental initiatives, as well as the introduction of key global models to the Philippine market.

The formal press announcement of his departure was attended by TMP Chairman Mr. Alfred V. Ty, who led the farewell toast that was joined by over 120 guests from the media.

“His hands-on leadership approach propelled Toyota to rebound from last year’s tough market conditions, and we are fortunate to have a President who truly led by example,” said Chairman Ty before raising his glass to President Suzuki.

Upcoming projects initiated by President Suzuki include: the P 4.5-billion Luzon Hub, which will revolutionize Toyota’s logistic operations; the Toyota Mobile App to better connect customers with dealers; and expansion to a new business model to explore long-term leasing of vehicles.

“This is not a final goodbye, but a new beginning. I am sure I will see you all again very soon,” said President Suzuki as he takes the final bow in front of the local media, with whom he has spent numerous launch events and drive activities, among others. His most recent passion project outside of work is playing football with dealers and the media.

The next President of Toyota Motor Philippines will be publicly announced early next year.
at 1:04 PM