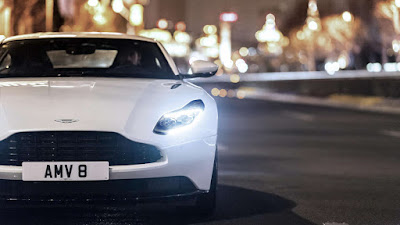 The Association of Vehicle Importers and Distributors, Inc. (AVID) began the fourth quarter of 2019 with 7,320 units sold in October equivalent to a 5 percent gain versus the 7,000 units sold the previous month. Despite a slight dip of 3 percent or 71,396 units sold year-to-date (YTD) in October compared to the same period last year, AVID is optimistic that the auto industry’s performance will make headway in the last two months of the year.

Sales in the Passenger Cars (PC) segment grew by 2 percent month-on-month (MOM) with 2,591 units sold in October versus September 2019. Hyundai maintains its industry leadership in this segment with 1,457 units sold in October alone, followed by Suzuki with 690 units. AVID’s YTD sales for PC dipped by 3 percent with 25,133 units sold versus the 25,821 units sold during the same period last year.

As for Light Commercial Vehicles (LCV), AVID recorded a 6 percent increase in MOM sales with 4,689 units sold for the month of October versus the 4,413 units sold in previous month. However, a slight dip of 4.3 percent in YTD sales was recorded with 45,536 units sold versus the same period last year. Ford leads this segment with 16,522 units sold, followed by Hyundai with 12,331 units, and Suzuki with 12,267 units sold since the start of the year.

In the Commercial Vehicles (CV) segment, AVID recorded a 7 percent drop for October with 40 units sold versus September. Overall, however, CV sales surged by 87 percent to 727 units in the first 10 months of the year compared to 389 units sold during the same period last year.

“Despite the challenges AVID faced in the past couple of years, the industry is poised to make a strong comeback as we are poised to step into a new decade. Our members continue to introduce new innovative models, value-packed service offerings, and easier ownership schemes to support our collective goal, which is to give Filipino consumers smarter mobility options so they can live the way they want,” Ms. Agudo ended. 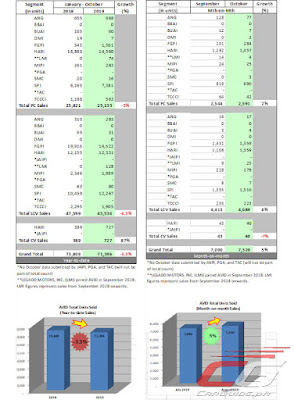