Nissan Adds Some Sportiness to Its 400-horsepower Skyline 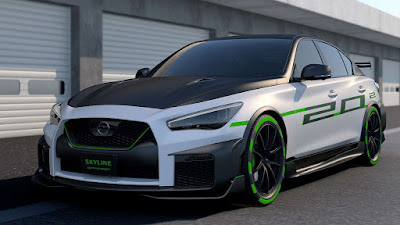 Car enthusiasts will know that since the R35, Nissan spawned off the GT-R into a model series separate from the Skyline. What most people don’t know is that the Skyline badge lives on in Japan; and most recently, it’s been exported as a mid-sized Infiniti.

Now, in its home market, the Nissan Skyline is topped off by the 400R which was launch in July of this year. As its name suggests, its twin-turbo V6 engine has been tweaked to push out 400 horsepower and 675 Nm of torque—making it the most powerful factory-built Skyline, ever.

Despite its power, some still consider the Skyline’s styling to be a tad tame. Well, no worries because Nissan’s stylists are giving it a racier flavor for the 2020 Tokyo Auto Salon. Called the Skyline 400R Sprint, it swaps the front and rear bumpers for sportier looking ones, and along with the large rear wing and forged 20-inch wheels, it gives additional street cred. The body itself is painted in a two-tone silver and black color with neon green accents.

We’re also wondering what the large “2.0” splattered on the doors mean. Though Nissan hasn’t said anything about it, it likely stands for Nissan’s ProPILOT 2.0 which the 400R has. Nissan considers it the next step towards autonomous vehicles because ProPILOT 2.0 can help maneuver it according to a predefined route on designated roadways. For the first time, it enables hands-off driving while cruising in a single lane.
at 11:06 AM