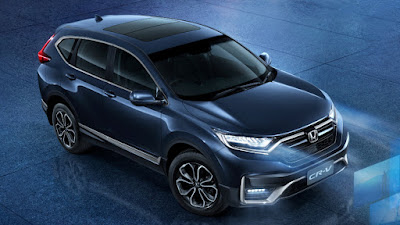 The 2021 Honda CR-V is slowly inching its way to the Philippines. After being shown in the U.S. as well as in Japan, Honda’s refreshed compact SUV has also been shown in Thailand. With the Philippines sourcing units from the Kingdom, it’s highly likely that this is representative of what’s arriving in a couple of months.

The refreshed CR-V in Thailand combines both the North American and Japanese versions. Like its U.S. counterpart, the Thai version comes with the new angular front bumpers. There’s far less chrome now as it’s been swapped out for high-gloss black ones. This matches the new black tinted taillights. Like its Japanese counterpart though, the 18-inch alloy wheels sport a machine-finished design and capped off by sequential turn signal indicators.

Inside, the 2021 edition remains largely unchanged with the same all-black motif with wood accents dotting the cabin. New though is a Qi wireless charging pad and a power tailgate with a hands-free kick sensor. Honda’s suite of driver assist technology, Honda Sensing, only remains available on the top-trim diesel variant.

Mechanically, the 2021 CR-V remains unchanged. In Thailand, it’s powered by either a 2.4-liter DOHC i-VTEC gasoline or a turbocharged 1.6-liter DOHC i-DTEC diesel. The former makes 173 horsepower and 224 Nm of torque, while the latter maxes out at 160 horsepower and 350 Nm of torque. The gasoline engine is paired with a CVT, while the diesel uses a 9-speed conventional automatic.

It remains to be seen whether the Philippines will receive these engine options, but it’s highly likely that the CR-V here will retain the 2.0-liter i-VTEC at least for the entry-level variant. Now, if Honda Cars Philippines is really listening to customer feedback, they would opt to switch their current 120 horsepower powerplant for Thailand’s more powerful two-stage turbo design.

In terms of color choices, the usual palette remains but a new shade—Cosmic Blue Metallic joins the family.