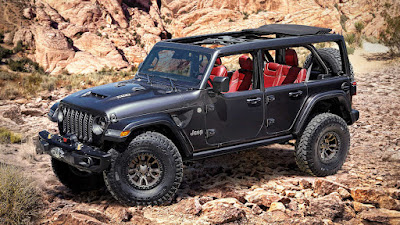 For FCA, the sure way to grab headlines is to stuff a V8 engine into anything. They’ve done that with the Charger, Challenger, Durango, and now, the Jeep Wrangler. Currently a concept, Jeep says the new Rubicon 392 Concept may pave the way to a production model coming soon.

To accommodate its 6.4-liter V-8 engine and a stronger eight-speed transmission, the Jeep Wrangler Rubicon 392 Concept features upgraded engine mounts and a modified frame. Suspension upgrades include new aluminum, monotube Fox shocks for improved damping and heat dissipation. A two-mode exhaust alters the performance sound at the touch of a button.

If Jeep does decide to bring this V8-powered Wrangler to production, it doesn’t take a genius to realize that they’ll likely do the same treatment to their Gladiator pickup truck which recently just got the EcoDiesel V6 option.
at 4:57 AM