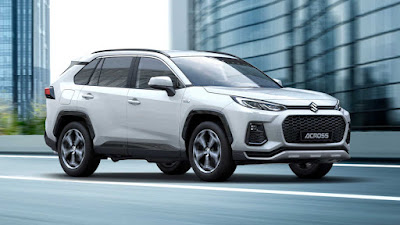 Suzuki’s new compact SUV looks strangely familiar, doesn’t it? It should be—it’s basically the Toyota RAV4 with a new front-end. Previously announced as part of a corporate partnership, Suzuki has now released the RAV4-based Across.

Supplied straight on by Toyota, the 2021 Across gets a more Suzuki corporate front-end. The angularness has been rounded off and the grille enlarged to match those seen in the Swift. The rest of the body though remains fairly similar down to the interior (the Across does get some unique detailing).

Meant for Europe, the Suzuki Across also shares the RAV4’s powertrain, specifically the plug-in hybrid. This pairs Toyota’s 185-horsepower 2.5-liter Dynamic Force with a 182-horsepower front and 54-horsepower rear motor. Overall, horsepower is rated at 302 horsepower with an all-electric range of 75 kilometers.

Like the RAV4, the Suzuki Across also uses the E-Four all-wheel drive system. This system uses the electric motors to vary torque anywhere between 100 percent to the front wheels to a 20/80 split when needed.

The Suzuki Across is only meant for sale in the European market. However, the Suzuki and Toyota partnership is expected to go global with markets such as ASEAN likely getting it in the form of the next-generation Avanza which is rumored to be based off the Ertiga’s HEARTECT platform.
at 5:15 AM