The 2021 Bentley Bentayga is More Luxurious than Ever 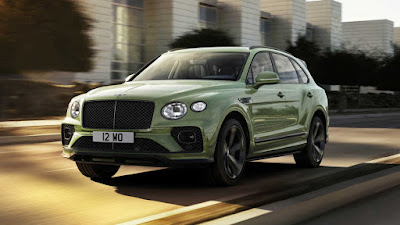 With more than 20,000 examples handcrafted since its launch (more than any of its competitors) the new Bentley Bentayga is set to build on an incredible success story to date. Combining the abilities of a performance grand tourer, a luxury limousine, a spacious family car, and an off-roader, the new Bentayga levels up on the success of its predecessor.

The new Bentayga gets a look inspired by the third-generation Continental GT and all-new Flying Spur. Every panel at the front has been redesigned for a cleaner, more modern look. The larger, assertive matrix grille is now more upright, while new, intelligent LED matrix headlamp technology includes the signature Bentley design inspired by cut crystal glassware.

At the rear, the new Bentayga has undergone a major transformation, with a total redesign of the rear surfaces including a new full-width tailgate with new encapsulated lamps, while the license plate has been moved down into the bumper for a cleaner appearance. A 20 mm increase to the rear track width brings dynamic benefit and re-positions the wheels in their arches to improve the car’s stance. The wheels themselves are a new design, unique to the Bentayga.

Inside, the Bentayga’s highly praised interior has been significantly revised in the latest model. Among the major changes are a new center fascia and steering wheel, new door trims and all-new seats—now available with ventilation in the rear of the five-seat cabin option. Passengers in the rear also enjoy significantly more space, with legroom increased by up to 100 mm depending on configuration.

A next generation infotainment system is integrated seamlessly into the handcrafted, Bentley ‘wing’ dashboard design and features a 10.9-inch display screen with edge-to-edge graphics. The all-new digital display includes super high-resolution and dynamic graphics which are configurable to suit driver preferences.

The latest hardware and software bring all-new navigation with satellite maps, online search and other features. Wireless Apple CarPlay is standard for the first time, alongside the existing wired system, along with Android Auto. Rear seat occupants benefit from the introduction of a new, larger touchscreen remote control tablet.

The new model will initially be launched in Bentayga V8 guise offering supercar performance balanced with everyday usability, with the plug-in Hybrid and W12-powered Speed versions to follow this year. The V8’s 4.0-liter, twin turbocharged petrol engine develops an impressive 550 horsepower and 770 Nm of torque. 100 km/h arrives in just 4.5 seconds, while top speed is set at 290 km/h.

The new Bentayga offers the widest range of on and off-road drive settings of any SUV courtesy of Bentley’s Drive Dynamics Mode and the optional All-Terrain Specification. Up to eight modes - four on and four off-road - are available, allowing drivers to select the perfect dynamic set-up for any surface or road condition at the turn of a dial.

Later, new Bentayga will be offered as an efficient plug-in hybrid. It will be Bentley’s most efficient model ever and is the company’s first step towards electrification.There will also be a performance-focused Speed model, with even more purposeful styling. The Speed is the pinnacle of the Bentayga range and will be powered by Bentley’s renowned 6.0-liter W12 TSI engine.
at 4:38 AM