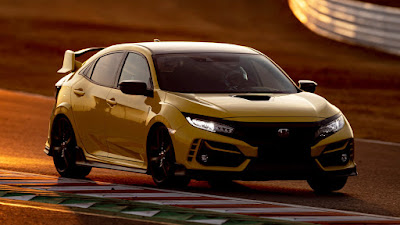 Building on the dynamic performance capabilities of the standard Civic Type R with new lightweight components, the record-breaking lap was achieved as the Type R Limited Edition underwent its final performance evaluation. The development car featured the same technical specifications representative of the production version, with no modifications or performance enhancements.

The 5.8-kilometer Suzuka Circuit is renowned for its high-speed chicanes and challenging corners, with a distinctive ‘figure eight’ layout that includes a long 1.2-kilometer back straight, which passes over an earlier section of the circuit just after Turn 9.

Widely regarded as a highlight of the Formula 1 calendar, Suzuka has been an important test bed for developing performance Honda vehicles and engines since 1962. It was built on the instruction of company founder and president, Soichiro Honda, who famously said: “Automobiles cannot be improved if they are not put through their paces on the racing circuit”.

For the high-speed sections though, the improved engine cooling performance allowed the Civic Type R Limited Edition to fully utilize its 320-horsepower power output to reach its top speed.

“While drawing inspiration from the voices of people all around the world who were surprised and pleased by the Civic Type R, we never stopped moving forward and striving for advancement beyond the expectations of our customers.  This enabled us to further refine the essence and driving pleasure of Type R as a sports car,” says Kakinuma. “In the world of motorsport, to stop moving forward is an immediate admission of defeat. Therefore, we must never stop moving forward. This ‘racing spirit’ has been passed down for generations at Honda, which is what drove us forward.”
at 9:02 AM