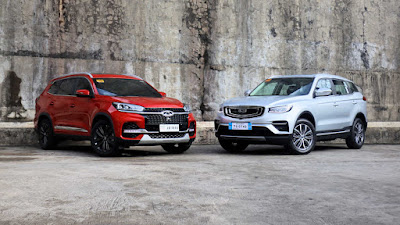 Chinese cars have gone a long way. From being cheap knockoffs a decade or so ago, thanks to deep pockets, they’ve now managed to incorporate design and technology to match with the best of the world. Of course, their prices have also gone up slightly, representing the wealth of features that they’ve begun to offer.

In the Philippine market, two of the most expensive Chinese SUVs that you can get are these: the Chery Tiggo 8 Luxury EX and the Geely Azkarra 4x2 Premium. Despite competing in two different classes (the Chery is a mid-sized SUV, while the Azkarra is a compact SUV), a similar powertrain and a P 98,000 price spread between them make for a great comparison.

More than anything, the clean and well-executed design of both these SUVs show how far Chinese cars have gone in a short period of time. Thanks to a strong belief in coming up with their own design DNA (as opposed to just copying other established carmakers), both the Geely Azkarra and Chery Tiggo 8 pass the all-important driveway test.

If anything, it’s the Japanese and Korean carmakers who should be worried. Besides the good looks, both are well-finished with good quality paint jobs, consistent finishing, and solid levels of construction. In addition, they’re speced extremely well too. Almost nothing separates these two SUVs—both offer LED head- and taillights, power folding mirrors, a panoramic sunroof, and 18-inch alloy wheels.

As impressive as they are on the outside, both the Geely and Chery are equally impressive on the side. Again, almost nothing separates these two in terms of appointments from their all digital gauges to their massive infotainment screens. Their execution though varies based on who their joint-venture partner is in China. For Geely, bits and pieces of Volvo are present, while for Chery, the center console is very close in appearance to the latest Range Rovers.

In the end though, it’s the Geely that stands out as the winner here. While the Chery has more premium touch points as a whole, far too many un-premium bits come in contact with the driver on a daily basis such as  the steering wheel buttons, light and wiper stalks, and gear lever which don’t exude the same look or feel as the rest of the Tiggo 8’s cabin, marring the overall experience.

The Tiggo 8 wins by default on this one. Not only is it actually more affordable than the Azkarra, but because it’s one size larger (it’s a mid-sized SUV), it sprouts a third row of seats. And take note, these aren’t vestigial or jump seats either. They’re actually comfortable; more so than anything the Fortuners or Montero Sports of the world could ever do. The second-row slides fore and aft too, allowing passengers to negotiate for knee room on their own accord.

Oddly though, entry to the last row of seats can only be done on the right-hand side. Though the entire second row folds completely flat, only the smaller part—the 40 of the 60/40 split-fold detaches from the floor rails. Sure, nimble individuals can still manage to climb over the folded seat back, but it requires a good stretch to do so.

The Tiggo 8 sides with what people consider to be traditional luxury. The ride is soft, waft-like; gliding over humps and bumps without transmitting any of them into the cabin. It neuters the driving experience by a huge margin, but at least it isolates the passengers from the hustle-and-bustle of the outside world. And while the Chery’s Acteco engine is far superior in terms of balance compared to its G Power counterpart, there are far more unwanted vibrations being transferred especially in the driver’s footwell.

Meanwhile, with none of the complex mild-hybrid system components in place, the Azkarra finally shows what it’s capable of. Though the engine isn’t so ideal when it comes to balance or aural quality, the added power and torque makes itself felt almost immediately. And though the 6-speed automatic feels lazy to shift at times, it does better than the Tiggo 8’s dual clutch gearbox which seems too preoccupied in smoothening out its shifts than delivering the right gear at the right time. It’s the Geely too that’s much more attuned to the needs of the driver. Despite the bouncier ride, the driver always feels in control, at least. The front-end feels quicker and the responses more immediate. Oh, and as an added bonus, it’s more fuel efficient too—10 km/L at an average speed of 17 km/h versus just 6.41 km/L at an average speed of 15 km/h for the Chery. If there’s one minor source of irritation, it’s the Azkarra’s small flat-bottomed steering wheel. Three-point turns are just so difficult to do.

Both of these SUVs are shining examples of being value for money. With the exception of not having any driver assist systems (blind spot indicators, collision avoidance, auto parking tech, and such), they’re loaded with everything except the kitchen sink. Think of a feature, and most likely both the Geely and the Chery have it.

However, it’s once again the Tiggo 8 that wins this round. Not only is it more affordable pricewise compared to the Azkarra, it’s got features not found in the Geely like rain-sensing wipers, power tailgate, Apple CarPlay, and a smart watch that doubles as a key. Sure, these may not be deal breakers, but what ultimately swings things to the Chery’s favor is its warranty program. While both offer 5-year warranties, it’s only the Tiggo 8 that gets a 10-year or 1-million-kilometer engine warranty on top of that as well as a free 3-year preventive maintenance service package.

In the end, both the Chery Tiggo 8 and the Geely Azkarra show how competitive Chinese cars have become of late. While they can’t boast of some far-fetched Western connection, honestly, they don’t have to. They aren’t household names yet, but from a purely product perspective, they’ve gone a long, long way.

Ultimately though, the winner in this sub-P 1.5-million comparo is decided by what kind of SUV you’re look for. If you’re the chauffer-driven or family-oriented type, the Tiggo 8 is definitely the one to get. It loses out in terms of handling and the drivetrain could use some polish, but it’s got more space, more toys, and a plusher ride. It’s the mind over heart choice, and it’s one that’s very easy to make.

However, if you’re looking for something that’s a bit more personal more enthusiast-bent, more heart over mind, the Azkarra’s the way to go. It loses points in terms of overall practicality, but the straightforwardness of the 4x2 Premium makes it a better bet over the needlessly complex mild hybrid all-wheel drive variant.