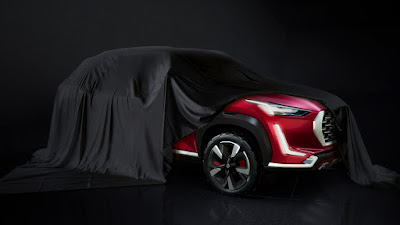 Nissan has teased its B-segment SUV designed specifically for the Indian market. The glimpse shows the headlights and grille of what the carmaker promises to be a “technology-rich and stylish B-SUV concept.”

While it is theoretically still a concept, the Magnite, as it’s rumored to be called, is close to production (it was previewed in the Nissan A to Z video). It’s set to be introduced in India by the second half of fiscal year 2020-2021.

The Magnite slots below the Kicks in terms of price and size, and conforms to India’s length-based excise tax. In India, a vehicle that’s less than 4 meters is taxed 8 percent, but as soon as it goes over 4 meters, the excise duty goes up to 20 percent.

Nissan hasn’t revealed much detail about the Magnite but it’s said to be a stillborn Datsun product running on the EM2 platform. Power will likely come from a 1.0-liter 3-cylinder engine making 72 horsepower and 96 Nm of torque mated to either a 5-speed manual or automated manual.