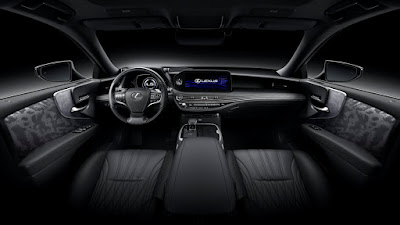 Lexus just refreshed its flagship LS sedan for 2021, and by the looks of it, it’s shaping up to be the most luxurious Japanese car ever made.

In a move they’ve been doing of late, Lexus has embraced the notion of Japanese luxury and sensibility. Rather than slapping on something already seen and done in the west, Lexus has looked to the “path of moonlight on the sea,” for inspiration. And while it does sound like a haiku, there’s no doubt that the intermixing of black, silver threads, and brushed aluminum create an unparalleled experience befitting a flagship sedan.

More than just its new interior fittings, the refreshed Lexus LS also debuts a new exterior color: Gin-ei Luster. It’s said to have a smooth, mirror-like texture but is absent of typical granular metallic flakes. This was achieved through a new painting method which condenses the paint volume.

Other changes in the 2021 Lexus LS include Lexus Teammate which is their term of advanced driving aids, including single-lane highway autonomous drive. Then, there’s BladeScan AHS which shines its LED headlights to a high-speed spinning mirror. With that, the light can be distributed far more evenly, and the beam thrown longer without impeding the visibility of other drivers. Finally, the traditional rear-view mirror has been replaced by a digital high-resolution display.

Aesthetically, the 2021 Lexus LS gets reshaped bumpers, refreshed trim, and the use of black on the steering wheel controls and center console for improved visibility.