The 2021 Mercedes-Benz S-Class Will Have More Screens, Less Buttons 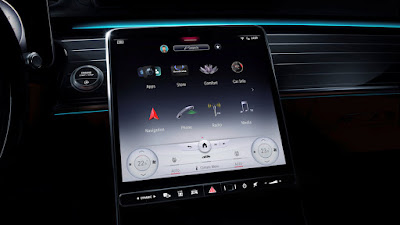 Mercedes-Benz and its 2021 S-Class will have plenty of screens and fewer physical buttons—that’s their promise as they showed off a glimpse of what their MBUX infotainment system looks like in their flagship sedan.

According to the German carmaker, no other innovation in recent years has so radically changed the operation of their cars as the MBUX. With the S-Class, they promise an even more digital experience with up to five screens (three at the back), using OLED technology. Moreover, there are far more personalization options including a new 3D driver display for the driver.

The voice assistant “Hey Mercedes” is capable of even more dialogue. Whether you find it creepy or intuitive, certain actions can now be performed even without the activation keyword such as accepting a phone call or displaying the navigation app.

Oh, and of course, online security is a must nowadays so fingerprint, face, and voice recognition have been added to personalization settings or digital payments made from the S-Class.

Finally, and perhaps its most unique feature is the integration of MBUX to the car’s wide range of vehicle systems and sensors. For example, the exit warning function in the S-Class now uses cameras to recognize that an occupant wants to leave the vehicle. If another road user is approaching in the blind spot, the active ambient lighting becomes part of the exit warning system and flashes red. MBUX Interior Assist checks whether the child seat is correctly attached to the front passenger seat. The driver’s attention level is also monitored. The driver is warned by Attention Assist if there are signs of microsleep.

You could say that the new S-Class can now be experienced with almost all the senses: seeing, feeling, and hearing while offering numerous innovations in the areas of driver assistance, protection, and interaction.
at 5:05 AM