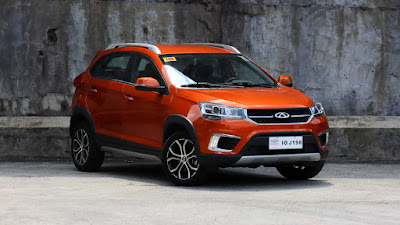 For any product to succeed, not just of the automotive variety, they must fulfill some basic requirements. Called “hygiene factors,” they’re the simplest set of values that consumers expect even before they’ll consider a purchase. Let’s consider a can of corned beef—the most basic requirements would be that: it’s affordable, well-packed, and edible. So, while the “can affords” would rather have Delimondo coating their tongues, a can of, say, Argentina should suit the hygiene factors for canned meat. Where are we going with this, you ask?

Well, since Coco Martin’s been vocal that his preferred can of stringy beef is Argentina (the brand, not the country), he should be an expert now when it comes to a brand’s so-called “hygiene factor.” With that in mind, he should be perfectly comfortable trading his plate of mystery meat for a seat of car keys. And with that, we come to the Chery Tiggo 2—a car that’s very hygienic in that it fulfills all of the basic requirements for a brand-new car.

At P 770,000, the Tiggo 2 has an engine, four wheels, protection from the elements, and an ultra-long warranty—features which are more than enough for its intended market. However, Chery’s gone beyond that. Understanding the need to stand out, they’ve given it chock-full of features, cramming it with features than what’s typically found in this price range. The most basic, but most important to a lot of buyers, is an automatic gearbox. Then, you add things like ground clearance, safety features, and a decent infotainment system. Things are off to a great start, then.

As we delve into the looks, the Tiggo 2 passes muster as well. The looks aren’t swooshy or anything, but at least they’re clean, tidy, and most important of all, not a facsimile of anything. Gone are the days of Chery copycatting someone else’s design, and instead here’s a respectably done, albeit slightly generic design. A minor quip though is the incongruence between the angular front and curvy rear ends, as well as a small piece of body work that visibly protrudes below the side sill. Yes, that’s the anchor point for the tire jack, but it could have been hidden better, or at least painted to blend with the black cladding. The fit and finish is generally alright though the rear door requires a good pull to open.

Like its exterior, the Tiggo 2’s interior is modern, neat, and purposeful. For its price point, soft-touch materials aren’t expected, and true enough, there are almost none save for the padded door trim. Nonetheless, the leather steering wheel, well-done aluminum trim, and carbon fiber finish on the dashboard do well to create a welcoming look and feel. To the well-trained eye, there are some visible cost-cutting measures—like how there’s almost no plastic cladding on the hatch or how the antenna’s actually “printed” on the front windshield, but at least everything is well screwed together.

Perhaps the most controversial aspect of the Tiggo 2 is its gauges. With a speedometer that moves clockwise, and a tachometer counterclockwise, it reads like a recipe of being indecipherable. Thankfully, this is further from the truth; they may be over styled, but they’re legible. The rest of the package though is mixed at best.

The amount of adjustment to the steering wheel and driver’s seat is more than enough, but because the latter is mounted high (they’re even higher than the rear seats) bonking the A-pillar during ingress/egress is an everyday occurrence. Then, you get to things like where the power window switches are located (it requires you to tuck in your left shoulder to press properly) or the overly ornate door pulls (you tend to bang against it when driving).

On the subject of interior space, it’s good, but not spectacular. The front seats allow for ample room (just watch the A-pillar and door pull), but those in the back will feel crowded. The front seat backs are thick and this encroaches on the already tight knee room. Sitting three abreast is still possible, but it’ll surely be tight. Still, kudos to Chery for putting in three-point seatbelts and individually adjustable headrests in the Tiggo 2. Meanwhile, the cargo hold is generous enough to fit two full-sized luggage or a week’s worth of groceries.

So far, so okay for the Tiggo 2. At this point, it’s managed not just to meet a modern car’s basic requirements or hygiene factors, but in some ways, it’s managed to surpass them. Alas, this is before we get to the driving part. See, while it moves, steers, and brakes as any car should, it could use more refinement. It takes you from Point A to Point B in relative comfort, in safety of your own private bubble, but no more. This here is, simply put, a means to mobility.

Let’s start with the engine. Under the hood is a 1.5-liter 4-cylinder that makes a respectable 106 horsepower and 135 Nm of torque. Now, while these figures are in line with engines of similar displacement, in this particular case, it doesn’t feel adequate. Part of the reason is probably down to the Tiggo 2’s portly 1,215-kilogram curb weight, but the bigger culprit is down to the 4-speed automatic gearbox.

It beats having to row gears and exercise the left leg in stop-and-go traffic (it’s got cruise control too), but the gear ratios are mismatched to the engine. On anything less than 50 percent throttle, it’s lethargic, but the moment you press down hard, it kicks down. The sensation is largely on/off, and hard to predict at times. And this is on its default “Sport” mode. Selecting “Eco” makes matters worse—it fills the cabin with all sorts of knocking sounds, like the engine will explode at any minute (spoiler alert: it doesn’t). Whatever the drive mode though, fuel economy isn’t a strong suit for the Tiggo 2: it rests at 8.06 km/L at an average speed of 16 km/h.

Despite its small size, the Tiggo 2 doesn’t feel particularly nimble. While the small dimensions, and large windows and mirrors are ingredients for a great urban runabout, its road feel is closer to that of a big car. This makes it great for eating endless kilometers in a straight line (and boy, it’s actually pretty stable at speed), but not for zipping around in Metro traffic. The hydraulically assisted steering is as old school as they come, but it does return decent feedback. Sadly, it’s not much fun to push through corners mainly due to its putty-like body structure.

The Chery Tiggo 2 doesn’t score high from an enthusiast’s perspective no matter how you spin it, but once you go back to it being able to fulfill the basic requirements (aka hygiene factors) of a car, it does well. The Tiggo 2 is like going for Coco Martin’s favorite corned beef brand. It’s not exactly premium, but it still makes for a respectable breakfast. Those who can afford can go look elsewhere, but for those who’re looking for a means of four-wheeled mobility; those who’re looking for a safe means to go around in the “new normal,” this SUV sure looks tasty.